THIS ARTICLE WAS IN THE HERALD EXPRESS & FEATURED ON DEVONLIVE wriiten by Guy Henderson- we felt it appropriate to share with you as we remember, and pay tribute to  The Master of Mirth - the Comedy Legend, ROY HUDD OBE, who sadly passed away today 16th March 2020. RIP in peace Sir!.

Roy Hudd sparkles like a bottle of good champagne, according to the pen picture in the programme for an early appearance at the Babbacombe Theatre.

The much-loved comedian and actor is these days more of a fine, rich British ale – seasoned and mellow – a rolling cascade of stories and laughs when our reporter Guy Henderson catches up with him for a chat ahead of his latest trip to Devon.

In the 1962 summer show Out Of The Blue, devised and produced by the formidable Dickie Pounds, he acted as the host comedian, appeared in dozens of comedy sketches and even danced as a can-can girl.

At the end of the show he got to perform his own routine before leading the big farewell number with the whole company.

Then, after God Save the Queen had sent the audience happily out into the evening sunshine, the company would be back on stage to rehearse new material late into the night – preparing a fresh revue to keep the demanding locals and holidaymakers happy.

“It was the best grounding I could ever have had,” says Roy. “The Babbacombe Theatre was the most incredible training ground for performers.”

Now 83 years old and celebrating six decades in showbusiness, he is returning to Babbacombe in April for a show in which he and wife Debbie share stories and anecdotes.

The show started as a one-off to raise funds for their local village hall in Suffolk, but that went so well they decided to take it on the road.

Roy was in his early twenties and fresh out of National Service when he first set eyes on the cliff-top Babbacombe Theatre.

He did four back-to-back summer seasons there and says: “I learned more in those four years than I ever did before or ever have since.”

Dancer Dickie Pounds was “an eccentric firecracker of a lady” who worked her company hard, he recalls. “She was terrific, though. We all had to dance, and that was a scream! She even made us do ballet, which was all new to me, but she was a marvellous teacher.

“She encouraged everybody, and so many of the young people who worked on those shows went on to do marvellous things.

“For the last two years Dickie entrusted me to be the main comic, and that was my biggest break in showbusiness – the biggest leg-up I ever had.”

Roy went on to radio, TV, stage and film fame. His satirical radio show The News Huddlines ran for more than 25 years; he had his own TV sketch shows and played the undertaker Archie Shuttleworth in Coronation Street.

He has acted in TV series as diverse as Ashes to Ashes, New Tricks, Call The Midwife and Broadchurch and played Fagin in the West End production of Oliver!

He is an acknowledged expert on the history of music hall and an authority on the comedian Max Miller.

But he still credits Babbacombe with giving him the best of groundings, despite the hard graft of constant shows and rehearsals.

“It was a great show for the audiences too,” he said, “because we used to do five different two-and-a-half-hour revues, so people kept on coming back.

“If you came and stayed in Torquay for a fortnight you could see all five shows.

“And we used to have so many regulars coming back time and time again.

“People had great affection for those little shows, and all the locals would come on Saturdays, because that was changeover day. It was marvellous, and we got to know so many of them.”

It was while appearing at Babbacombe that Roy got his first big break in national radio, and he has fellow comedian Ken Dodd to thank for it.

Dodd was appearing in a show at the Pavilion on Torquay harbourside with Arthur Askey and Tessie O’Shea when his producer asked him if he had heard of any promising young comics on the circuit. Roy Hudd was the one they were all talking about, said Dodd, and the radio opportunity knocked. 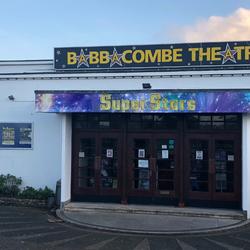